The UAE’s Ministry of Finance (MoF) has just got into a pact with Saudi Arabia recently to avoid Double Taxation and also prevent any tax dodging in terms of taxes on income and capital. This agreement was signed at Jeddah at the Saudi Ministry of Finance headquarters. This step shows UAE’s eagerness to reinforce collaboration in matters related to tax and thereby further improve economic relations with its neighbour.

During the meeting, the ministers also spoke about various other topics like the application of the two GCC unified agreements related to VAT and selective taxation. To ensure smooth functioning of the laws, a team would be put in place to supervise any problems and execute all the steps.

The Double Taxation Agreement actually demonstrates the efforts made to improve various new opportunities of investment, support and enhance imports and exports, and ensure that there is a free flow of trade and also investment. It will also enhance the capital flow, the exchange of services, and bring in more economic diversification while making the partnership between the UAE and Saudi Arabia stronger. This makes company formation in UAE and also company formation in Saudi Arabia much easier.

He explained that UAE is committed to doing more agreements dealing with avoidance of double taxation, and the imperative point out of this is the information exchange for the purpose of tax and adopting the best-in-class standards in terms of transparency and information exchange. The purpose is to achieve the goal of justice for tax-payers and organizations, protect the country’s economy, and also execute the decisions of Global Forum on Transparency and Exchange of Information for Tax Purposes, which enhances UAE’s spot as one of the top international fiscal and commerce centers.

Talking about some statistics, the transactions into real estate by Saudi nationals done in the UAE in the year 2016 touched the129.9 billion dirhams mark. While the volume of licenses granted for doing financial activities to Saudis residing in the UAE touched 10,896 in the year 2016. The total investments of the Saudi citizens and the Saudi banks located in the UAE were about 18.66 billion dirhams in 2016, whereas the trade figures between these two nations were plotted at 35.11 billion UAE dirhams. Did you know that Saudi Arabia stands third in the world and tops the charts in the Arab countries when it comes to UAE exports? It accounts for almost 45% of its imports from the GCC and around 28% of UAE’s imports that come from the Arab countries.

MoF had also signed some Agreements on the Avoidance of Double Taxation on income tax earlier with around 115 countries. The Ministry also stated its commitment towards the implementation of high levels of financial transparency and exchange of information for tax-related issues, which is in line with the G20 (Group of 20) decisions and the provisions done for Avoidance of Double Taxation agreements with other countries. 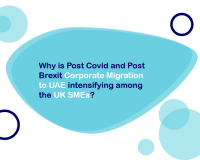